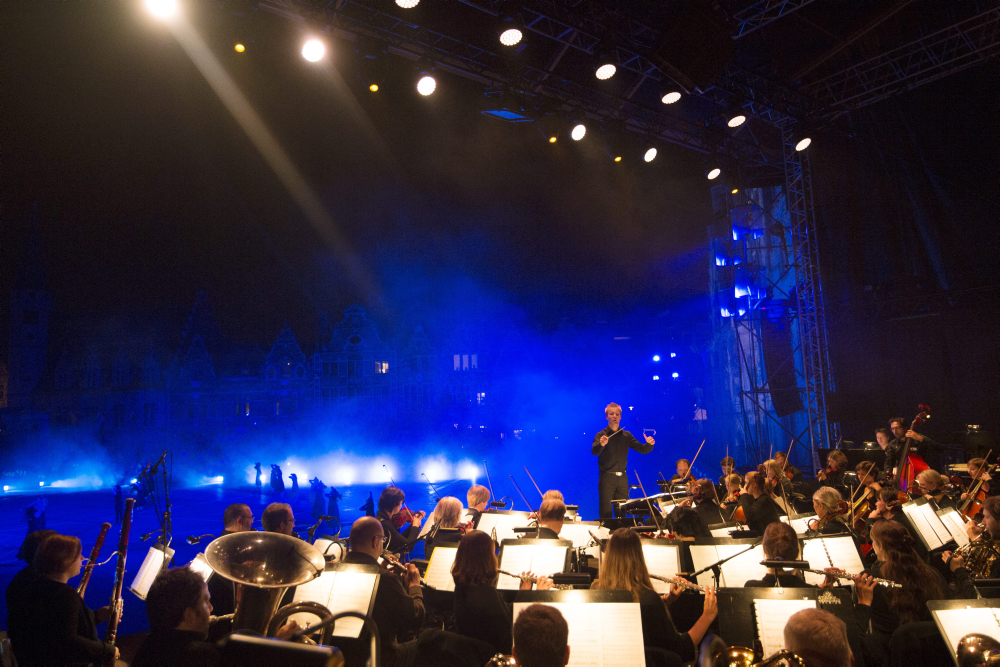 “Stad in As” (City Of Ashes) is a massive open air spectacle. Over 300 people joined forces to create an epic music/theater-show as to remember the losses the city of Dendermonde suffered during World War 1. I wrote the music for the event and conducted the 60 piece orchestra & 100 piece mixed choir. In this article I’ll show you how.

More than a year ago, Stijn Kolacny (Scala & Kolacny Brothers) started up a project ordered by the government to remember WW1.  He contacted me and we started brainstorming about what to do. Both being music lovers and fans of big epic shows, we decided to include as many people as possible to set up a spectacle that would be performed by the people of Dendermonde, to the people of Dendermonde. To do this, we needed a scenario. So director and scenarist Jan Geers joined the team and we started writing.

I knew things were going to be big. Many actors, dancers, supporting actors, dressers, etc. would be included into the play. So the music should sound big too. Huge actually. So we needed musicians and singers to pull this off. And many of them. We only wanted to work with non-professionals to make the event something very personal. From the people, to the people. Only the people from Dendermonde would be allowed. So Stijn and I started contacting the many local music associations: concert bands, symphony orchestras, choirs, music teachers, music students, kids choirs, etc. It took us days and days on the phone, explaining to people what we were up to. What we planned to do in their city. But in the end we got ourselves a nice big orchestra with all kinds of people, of all kinds of levels, with ages ranging from 12 to 70. We decided to split up rehearsals and rehearse separately with the choir and join them with the orchestra later in the process. Stijn would lead the choir-rehearsals, I would lead the orchestral rehearsals. Here’s picture of our first orchestral rehearsal:

The rehearsal room proved to be too small. It doesn’t look like that in the pictures, but trust me, it didn’t fit. So next rehearsals would be in another location.

And if that location would not be available, we moved to yet another location:

During the process of rehearsing, I was still writing music. The scenario wasn’t completely finished yet, so as bits and pieces of it were coming in the mail, I wrote music to it. The good thing about this is that I got to know the players quite well by then, so I could write specifically for them. I knew what certain musicians would be capable of and what would be impossible. I always wanted to make sure they enjoyed what they played, making it not so hard that they would lose themselves between bars and notes. For example: the string sections were set up with people of all levels. There was even a 12 year old girl playing in the first violins! So I even bought a cheap violin to check my writing and see if it would be possible for the people to play it. Don’t get me wrong: I can’t play the violin at all, but having one sitting around in my composition studio helps me in keeping things realistic. It would be stupid to write music that they would no longer enjoy because of it being too difficult. The key here is to find the sweet spot between keeping the music interesting and effective, yet fun to play.  And this applies to all instruments and all players.

So writing and rehearsing is what I did, it’s what we all did:

The mixed choir existed of a girls choir (20 girls, aged between 14 and 21) and an adult SATB-choir, together, forming a massive 100-piece choir. Here is a picture of Stijn rehearsing with the girls choir separately:

I made sampled versions of all orchestral pieces using many different sample libraries, like East West Gold, Choirs, Vienna, etc. This made it possible for the people to listen to the music in advance of rehearsals. It made practicing at home easier and more fun. It helped many people in the choir on finding and studying their parts (not all people could read notes). And it made my life as a composer a little easier. Communicating with Jan, the director, was much easier because of this. He could instantly hear what it would sound like and decide if he liked it or not.

Jan and I didn’t know each other before this project, so there’s always some time needed to get into each other’s minds. As a composer I want to underline the emotions and feelings that Jan wants to tell through the play. Music should help in telling the story. But my interpretation of the story could be different to his. So sometimes I would write something and Jan would say: “Great, that’s exactly what we need here!”.  Or he could say: “This feels wrong, it’s not what I mean.” It’s only after a while on the project that we were both on the same level of what the story should be and how we would tell it. For example: In one of the scenes, the City Hall would be captured by the Germans and set on fire. At first I thought this was meant to be an action scene with action music.  I sent a sampled demo to Jan and he would call me up: “That’s awesome! ….. but it’s not what I want.” He wanted to underline the sadness of losing the City Hall, the loss of one of the city’s symbols. After hearing this, I went back to the drawing board and came up with something completely different.

It is just the way things go. There’s no magic trick to it. You can’t look inside of each others heads. So getting to know the story and the director takes a little time. But it’s a great journey and you learn a lot doing it. After a while I knew what the overall score needed to be and I could just write and write, knowing Jan would like it. The sampled versions made this process a lot quicker and safer. No one would be surprised in the end. Everyone would be happy and satisfied.

Back to the rehearsals now! In a few weeks we would already be on stage. All actors started rehearsing with Jan, who was assisted by the very talented and professional assistant-director Ingrid Coppieters. Here’s a few pictures of their rehearsals:

It seemed like two separate worlds that knew of each other’s existence without ever seeing each other. Us, coming from the music world, them coming from the actor world. We were all looking forward to meeting them and joining together. Everyone was so curious for this to happen. But we weren’t ready yet. First we did a few more rehearsals with the orchestra separately.

I made sure we could already use the percussion instruments we would use on stage. The instruments were provided by Kick, The production office. I visited their company to check things out. I had the choice between hundreds of tam-tams, field drums, taiko drums, timpani, etc….  They loaded everything in the truck and headed to Dendermonde to drop everything of. The new rehearsal room was ready for a marathon of 5 rehearsals in 5 days!

Behind the scenes of the rehearsal process, Stijn and I were already doing meetings with the technical crew and planning how things would go on the technical side of things. We put together a most professional audio team, consisting of Tom Logghe, Karel Will, Bram Van Der Weeën and Michel Daems. Four highly trained and experienced sound engineers. These guys are the guys you need. They will make it happen for you. You don’t want to be rehearsing and doing all these efforts to finally get on stage and being surprised by the fact that you didn’t think about how it would happen from there on. Communicating with the crew, treating them with respect and being realistic about what is possible and what not will get you very far.  In the end, everyone, from the first actor to the last singer, from the truck driver to the sound engineers, wanted to make this event as good as possible. It is so awesome to be able to work like this. To be able to work with the best guys in the business.

To help the sound techs a little I wrote a document with a few tips to help them mix the show. Where and when a musician would play a solo for example or how a piece would be build up dynamically. I asked them to send me their patchlist (=list of mic inputs and mixing notes) so I could add a column with my conductor notes. They weren’t obligated to look at this, but I thought it might help them. Trying to make everyone’s lives as easy as possible. In the end, we all got into this business because we like it and think it’s fun. But doing a big production comes with a lot of stress and responsibilities. So helping each other out as much as you can is the way to go! For example: I’ve put the chairs and music stands on stage myself, as well as the percussion instruments and the remote carillon. I placed the risers for the choir, percussion and piano where I wanted it myself.  I know how and where everyone in the orchestra sits. So doing this made it possible for the techs to prepare their cable looms, mic stands, etc.

Everyone worked so hard to set up the venue. It creates a sense of accomplishment and pride. One big family getting things done:

Meanwhile the orchestra, choir and actors were joined together. We did two big rehearsals in a giant sports hall putting everything in it’s place. Adapting the music to the play, getting used to the actors and they to us….  Epic is the word here. Everyone was looking so forward to these days. It is so much fun when it all comes together. But we weren’t there yet. We still had to move to the venue itself. So a few days later we all moved to the stage and did two rehearsals there.

Meanwhile the crew would soundcheck everything and lighting would be tested and rehearsed. Kristof Van Mensel was the light designer and operator for this event. His skills seem to be endless. At night the venue looked just awesome. All actors and musicians couldn’t get their eyes off it. It was just beautiful.  Also the huge video projection on the City Hall, provided by Stefan Uytterhoeven made everything look very special and intense.

Showtime! Finally! After all this writing, rehearsing and working it’s finally time to get on stage! We did two shows. Every show was sold out. Over 4000 people in the audience were waiting anxiously for what they were about to see. The maximum capacity of the venue was used and still many many people wanted to get in. Unfortunately this wasn’t possible. But the second show was completely recorded and broadcast on television. Here’s a picture taken from the orchestra stage, a few minutes before showtime:

All actors, musicians, dancers, etc played like never before!  We had an amazing time together and the crowd liked it very much. A DVD and CD will be available for free download very soon. In the meanwhile these pictures will give you an idea of the result of a year working and enjoying music and theater:

All the lovely people from the orchestra & choirs

All dancers, actors, supporting actors, people working behind the scenes