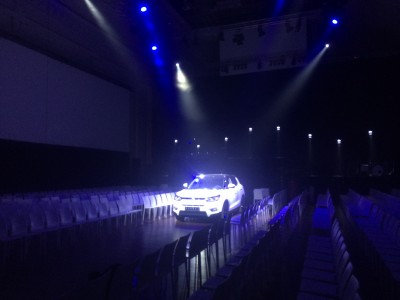 A flashmob to engage the audience during an event to launch a car? No problem!

During a two day event at Tour & Taxis in Brussels, capital of Belgium, our client, Bevas Events, needed a way to take the Ssang Yong Tivoli Launch to the next level. They wanted to create a real experience for the audience, an interactive and creative way to reveal the new car. Therefore I wrote some music that would build and build towards a climax on which the car would become visible. To go that extra mile, I wrote the music with the idea of a flashmob in mind.

On the day of the launch, our performers were placed in the audience and nobody knew that they were performers. So when the lights went off and the show started, the performers got up one by one and they started singing. Supported by a timecoded lightshow, this had great effect. The stage became visible, the musicians became visible and more and more performers joined the act, building towards the climax in music and lights and then “BOOM”, the car was suddenly revealed.

I could not have been more happy with the result myself. Our client, Bevas Events and their client, Ssang Yong Motors, were very much amazed by what they had seen. Job done, everyone happy! What more can I wish for?