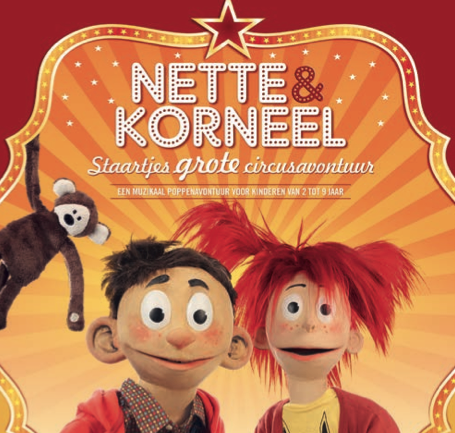 A Musical For The Little Ones!

Monkey’s Big Circusadventure is one of my latest projects. It’s a kids musical starring Nette & Korneel, who are the main characters of VTM Kzoom, one of the national kids TV-channels.

The musical tells the story of Nette & Korneel’s little monkey who feels a little small in this big world. When his wish of becoming a bigger monkey comes true, the adventure starts. He leaves his two friends ending up working in a circus. The slightly evil circus owner has some dangerous plans with Monkey though! He wants to shoot Monkey through the air with a big canon. Monkey tries to escape the circus but is captured by the circus owner. Luckily Nette & Korneel found Monkey in the circus just in time and save him from the circus. The story was written by Griet De Wolf, who also directed the musical.

I wanted to get away from the pop/rock – sound that’s being used for the TV shows. I wanted to create a musical landscape that would really help in telling the story, just like in a movie. I orchestrated the tunes for an orchestra + band, which I think is a great combination for these kinda things. Apart from the songs, I wrote quite a bit of underscore too, giving all the characters a certain theme. Music styles vary a lot coming from orchestral stuff or even big band swing over to hip hop and folk rock, which to me was very fun to do. Not being restricted to a certain genre keeps the composing proces fresh and inspiring.

The on stage set was designed by Krisof Van Mensel and created by Wim Boeckx. It divides the theatre stage in two main areas. The biggest of the two is the circus itself. The other one resembles a camping site in a forrest. The scene decoration was designed for quick set-up times and easy transportation from venue to venue. Other items include the big canon that fits a full-grown man and the circus box-office. Being the light designer and operator of the production, Kristof integrated lighting fixtures into the decoration, assuring a consistent look, going from venue to venue.

The small cast exists out of five actors:

The musical is now playing in many different Belgian venues and will be playing for the next two weeks with one show every day.